All Collections
Forecast v.2
The effect of SERP features on CTR

The effect of SERP features on CTR

In our CTR research, we calculate the impact of SERP features on CTR and include it in our forecast to get precise estimates.

Written by Megha
Updated over a week ago

Along with organic results, Google Search shows SERP features such as featured snippets, image packs, video carousels, questions, etc., based on the search intent. These are present on the first page of the results and occupy a significant portion of the first result page, leaving lesser room for organic results. When users find answers in SERP features, they no longer click on the organic links. So, the organic links end up getting fewer clicks in the presence of SERP features.

We analyzed this impact and quantified it through our CTR research to determine what percentage of overall clicks on the Top 10 ranks the SERP features consume.

We selected 4 million non-branded UK & US keywords with high search volumes for a specific month. We enriched them with SERP features and their positions from our rank tracker, and also impressions, clicks, and average positions from Google Search Console, for that selected month. We aggregated close variants for these keywords (just like Google) and segmented the data by device so we could calculate the impact for both desktop and mobile.

Let's dive deeper into our process.

This gave the percentage of clicks impacted by each SERP feature for each of the top 10 ranks.

The results give us a precise percentage of clicks that each SERP feature consumes, for each top rank. We calculate this for each keyword based on its search volume, SERP features mix (and their positions). You can find this metric, called ΣCTR, in the rank tracker, and this helps calibrate your expectations on how much search volume is actually left to be influenced by SEO.

Based on our CTR research, we account for the impact of SERP features on CTR while forecasting additional sessions. Once you choose the keywords, their target ranks, and a timeframe, you can see the algorithm in action. Among other variables, we consider CTR and % clicks to improve the precision of the forecast. 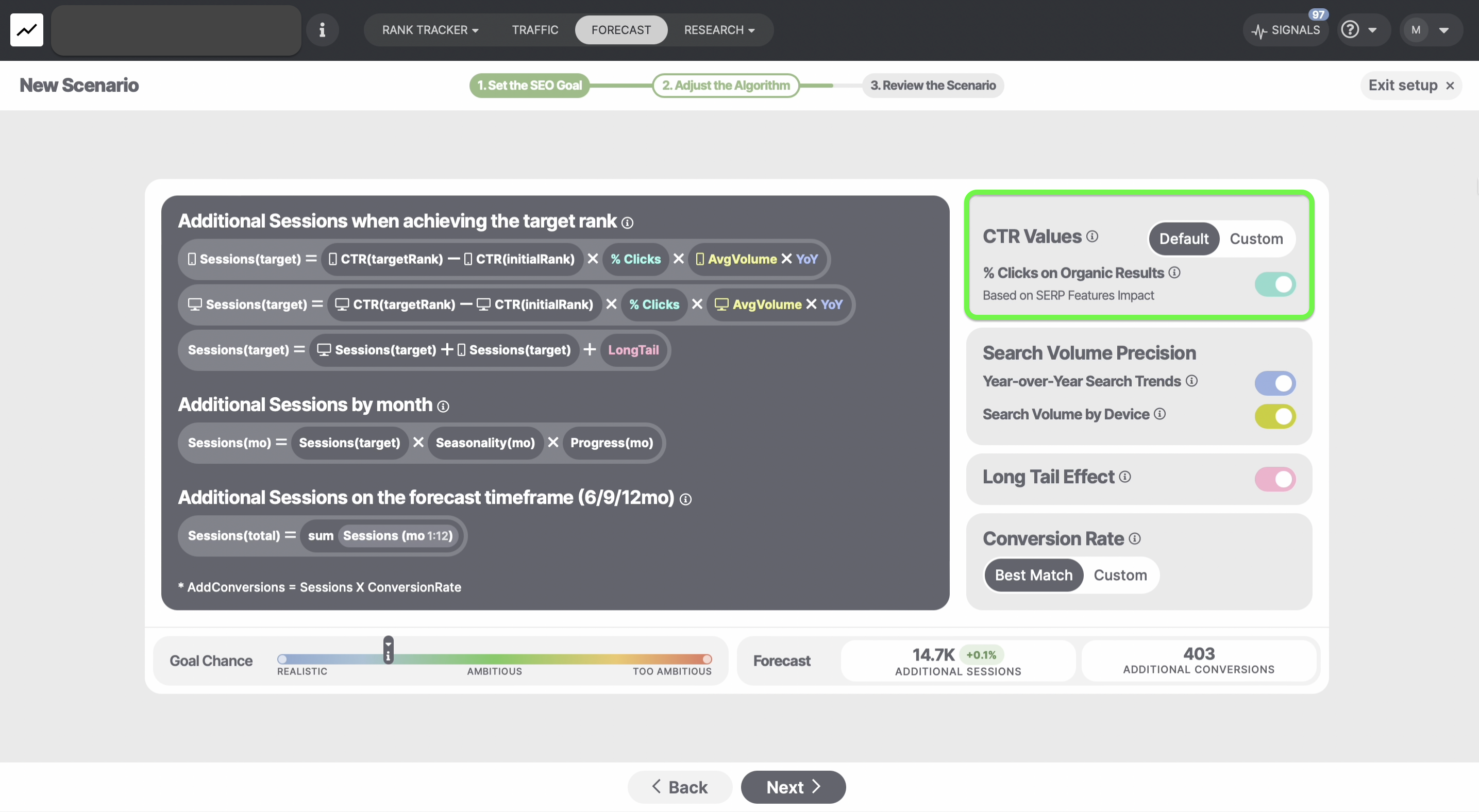 The % clicks metric is a keyword-level metric that you can see in the rank tracker (ΣCTR) that takes into account the impact of the SERP features mix on each keyword, and the CTR metric is the curve calculated for the top 20 ranks for each keyword. If the CTR curve is based on different research in your case, you can choose to input custom rates. 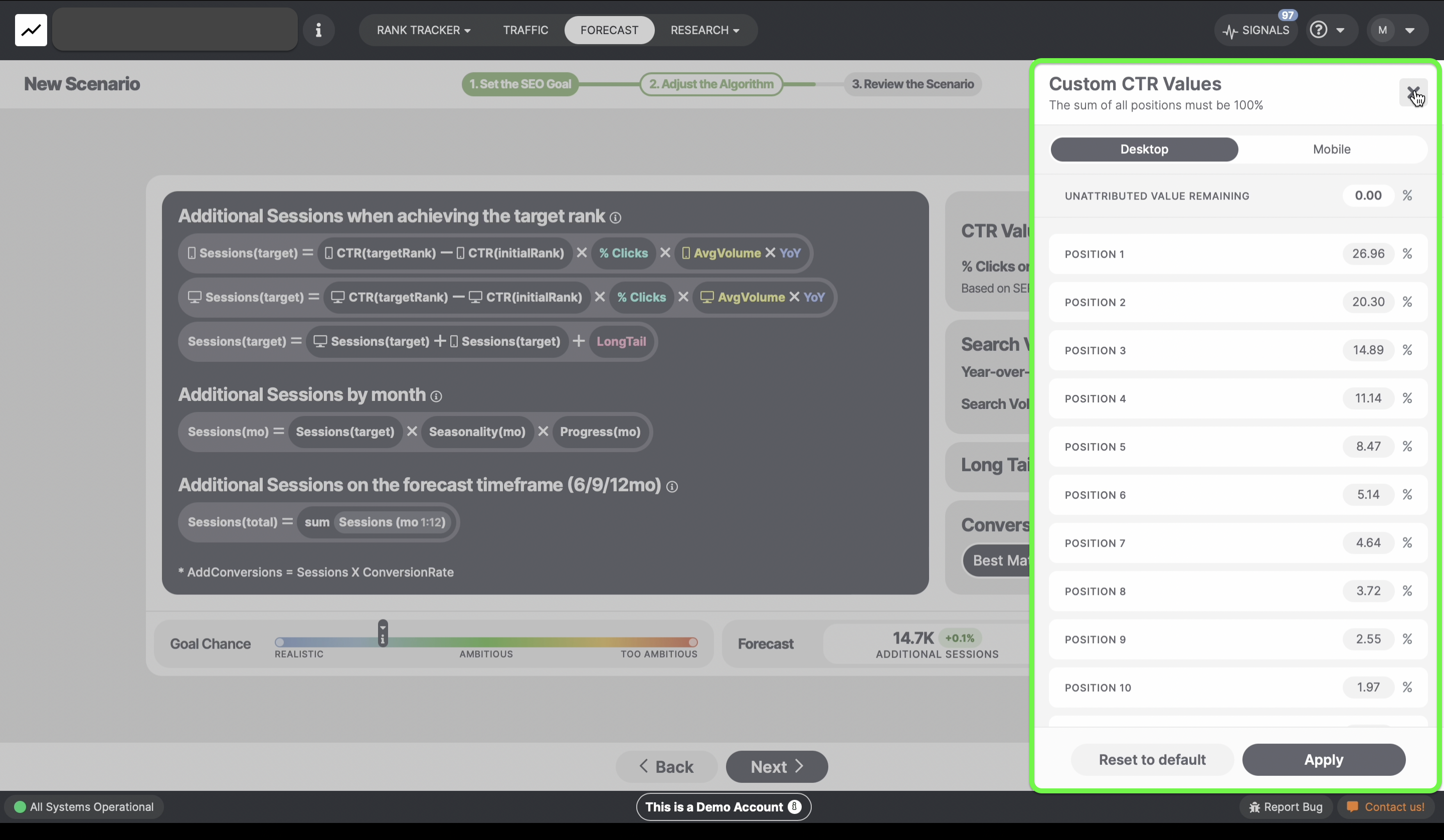 We first average the CTRs of the target ranks. For example, if the chosen target rank is 1-5, then the CTRs of 1 through 5 are averaged for the target CTR. We then calculate the difference between the initial and the average target CTR. We then adjust the search volume based on these values to determine the percentage of search volume that is left for SEO to influence and then the resulting clicks from it. We segment it by device so that you have visibility of the metric for both desktop and mobile.

Among other variables that influence organic traffic, we take into account the impact of SERP features on CTR based on our extensive research, and this improves the precision of our forecast algorithm, making it more reliable.