Sophisticated for precision, but fully transparent so you can understand and trust it.

Our precise algorithm estimates the amount of non-brand additional sessions, conversions, and revenue you'll get if you achieve a specific SEO goal over a specific future timeframe. SEO forecasts are not magical predictions but rather based on a meticulous, research-driven algorithm that generates precise estimates. Here, we describe what it uses and how it works, so you can understand it, trust it and communicate it to your stakeholders.

The first step to creating a forecast is to set an SEO goal. The following variables that you enter to set up this goal are the inputs for the algorithm:

We take these inputs alongside up-to-date Rank Tracker data and make it more precise by including the effect of SERP features on CTR, Year-over-Year values, and segmenting it by device. Here's how we do it.

Rank-only estimates do not consider several variables that influence non-brand organic traffic, and as a result, we might end up with crude estimates which aren't good enough in today's search landscape. This is why we not only consider ranks but also clicks alongside all other key variables that influence non-brand organic traffic so that you get the most precise estimates.

The Clickthrough Rate is the number of pages that get clicked on, out of the total organic searches, based on their ranking position. SERP features consume a part of the organic clicks, and from our research, we have calculated this impact of the SERP features on CTR.

We take this into consideration and calculate the % of clicks organic results that get clicked on, individually, for each device in the presence of SERP Features. We combine this with the difference of CTRs between target and initial ranks for keywords without SERP features. This is how we express the influence of SERP features on the clicks. 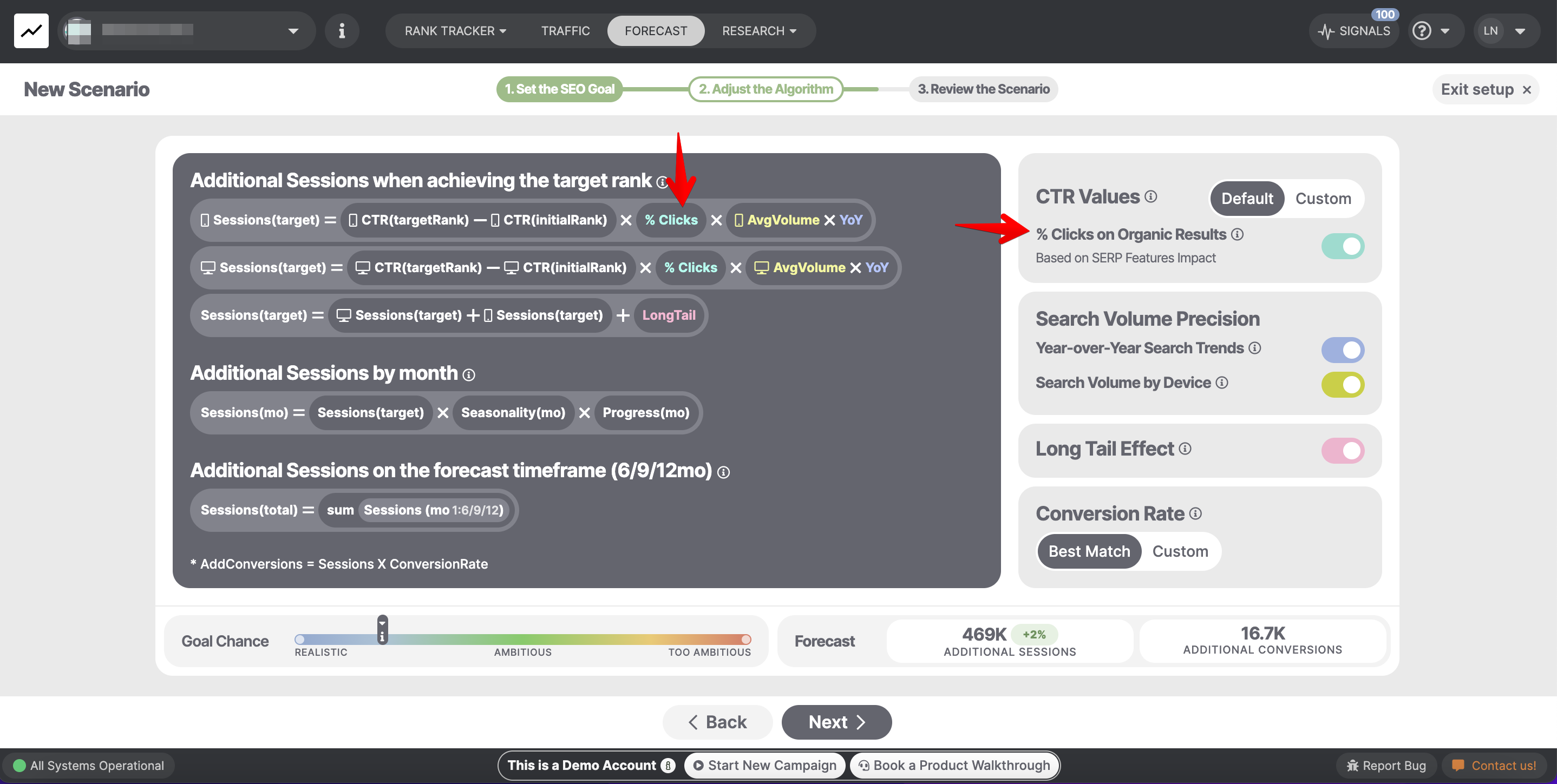 Note: Click on “Custom” if you want to input your own CTR values for each rank.

We consider the average search volume for the keywords when the website reaches the target ranks, and improve its precision by considering their Year-over-year values and segmenting it by device.

Using our curated keyword database and the topic aggregation system, we can identify these long-tail keywords and include their impact in the calculation.

With every parameter defined, the algorithm estimates the overall Additional Sessions each keyword will generate when achieving the target rank within the timeframe. We then work backwards to get the Additional Sessions for each month according to the progression speed and seasonality of that month.

We add all the monthly values to get the number of additional sessions for the entire forecast timeframe. 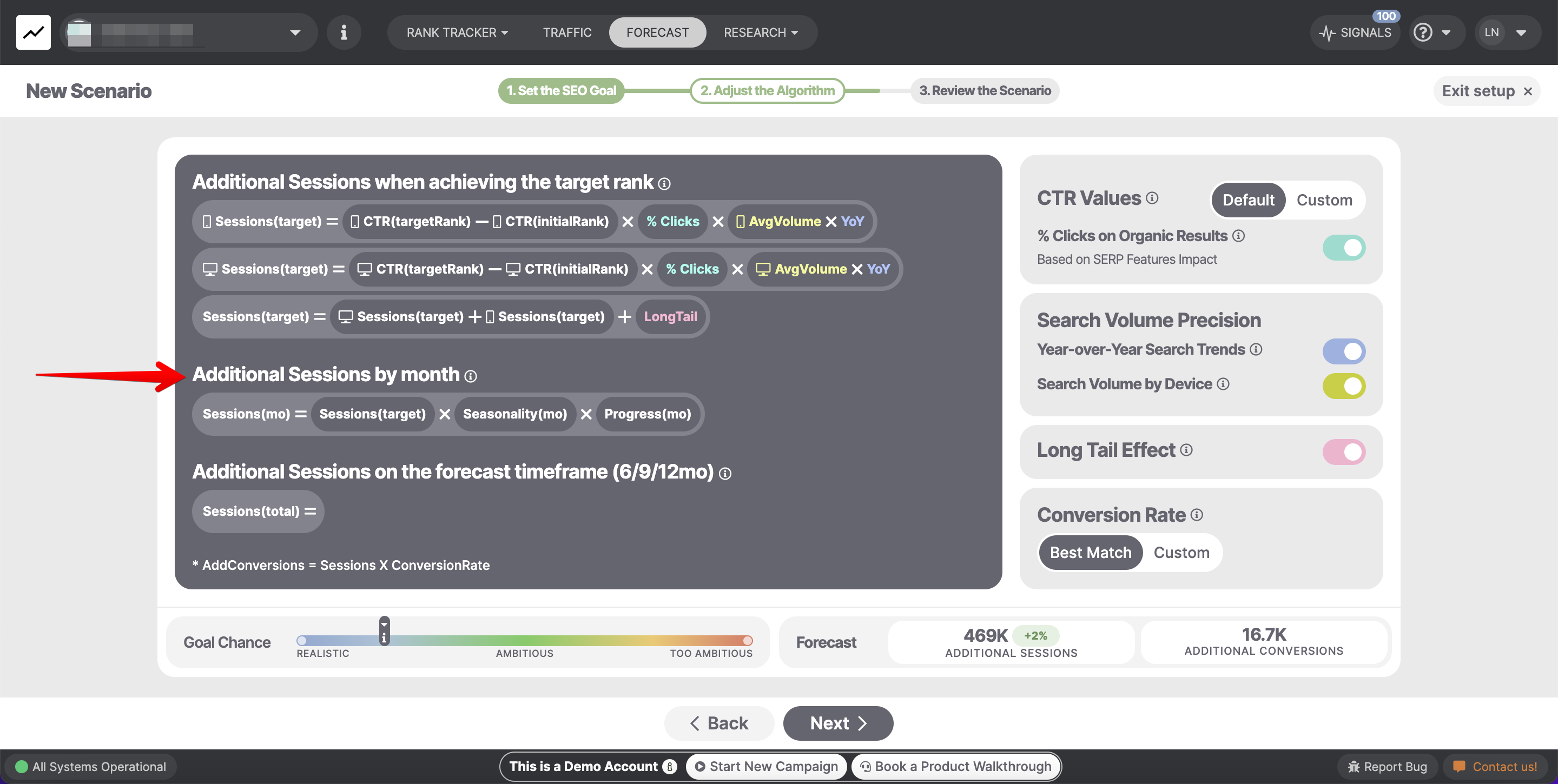 The "Best Match" option will fetch the first available conversion rate for each keyword, in this order:

If the keywords are new ones that don't have historical data in the Rank Tracker, there may not be conversion rates for them. In such cases, the overall non-brand organic traffic conversion rate applies. You can also enter a "Custom" value instead.

We then use the data from Analytics, to convert these additional conversions to revenue.

We believe the best precision is achieved when all the variables are taken into account, but we give you the option to calibrate the algorithm by selecting only the variables relevant to you.

Our Forecast algorithm considers variables beyond search volumes and ranking data to arrive at a precise estimate of additional sessions. The algorithm shows the process and the detailed results, so that you can understand it, trust it and use it to generate reliable and pitch-worthy estimates.