Sophisticated for the sake of accuracy, but fully transparent for trust and understanding.

When setting up an SEO strategy, one important step is translating the SEO goals - namely keyword ranks or Visibility - into business metrics.

SEOmonitor's Forecasting module offers the unprecedented ability to predict the traffic and conversion results that can be obtained by reaching the set ranking targets. It works with estimations but, as the great statistician George Box put it, "while all models are wrong, some of them are at least useful". The applicability of our forecast comes from painting the picture of how achieving specific SEO goals could impact the business. This makes the business case tangible.

By anticipating the additional organic traffic and revenue resulted once certain SEO goals are reached, the Forecast will not only help you set a realistic objective, but also translate it into figures any budget owner can work with.

This article gives you some insights into the forecasting algorithm behind our award-winning Forecasting module.

The purpose of this module is to predict how the non-brand organic traffic of a website will grow if specific keyword ranks are reached. Therefore, the brand/non-brand segmentation represents one of its foundations.

Now imagine an SEO forecasting methodology that takes into account:

Let’s take each individual “piece” and explain it.

The forecast is based on achieving an SEO goal in a specific timeframe: Current state (0%) >> Desired state (100%). This parameter sets an estimated speed for the progress towards the goal, speed that can grow exponentially, linear or custom. 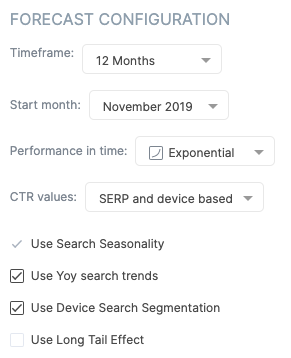 The CTR is a key parameter in the forecast projection. From our research, we've determined the average CTR curve for the top 10 positions on each individual combination of SERP features and devices. These CTR curves are correspondingly allocated to the keywords included in the forecast and used in the calculations. If you want to override our values and use another average CTR curve, you can choose the "Custom CTR" option.

The estimation of the additional conversions is based on the estimated additional visits multiplied by the corresponding conversion rate of each keyword included in the calculation.

The last option (3) can be enforced for all the keywords, or a custom one can be set up, if there's also an estimated improvement to the conversion rate in the selected timeframe.

Both the monthly Inertial Traffic and the Improved Traffic are using the search seasonality of the keywords that generate them, in the calculation.

The search volume of the keywords changes over time. When selecting this option, the forecast will adjust the search volumes based on their current Year-over-Year trend.

Use the device search segmentation

Each keyword has a different distribution of the search volume on the two devices. When selecting this option, the forecast calculation will split the search volume between desktop and mobile and use it correspondingly, with the CTR curves on each device.

The improvement in the rankings estimated in this forecast will impact keywords that are not part of the SEO target. When selecting this option, the system will estimate the impact on those keywords and their contribution to the estimated improved traffic.

The forecast is based on achieving an SEO goal over a specific timeframe. This is where you select the keywords for which you’re estimating to improve rankings in the selected timeframe. You can do so by choosing the keyword groups and the corresponding targeted ranks for the keywords within. If the same keyword is included in more than one group, it will only be taken into consideration once, with its highest targeted rank.

Based on the search volumes of the keywords in the selected groups and the targeted improvement in their visibility, along with all the configuration above, the forecast will be calculated. 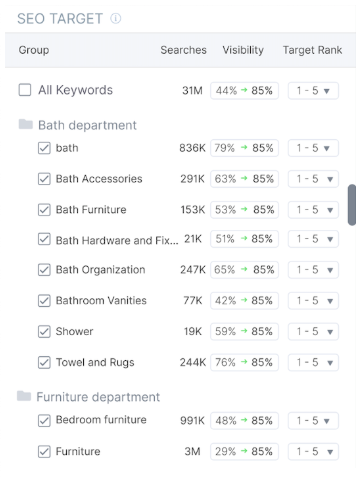 The number of keywords included in the forecast.

The total average monthly searches of the keywords included in the forecast.

The total searches on each month of the year for the keywords included in the forecast.

The percentage of searches that come from mobile devices, out of the total search volume, based on Google Ads' search data breakdown by device.

The Year-over-Year search trend of the keywords included in forecast. It is calculated by comparing the search volume of the last month to the volume of same month in the previous year.

The total number of visits estimated to be received through the duration of the forecast, based on the current traffic and the search trends and granted that there would be no changes in the site visibility.

The total number of visits estimated to be received through the duration of the forecast, based on the current traffic and the search trends, assuming that the desired ranks would be reached (so also taking the Visibility improvement into consideration).

The number of additional visits estimated to be received, in total, through the forecast period, if the targeted ranks are reached at the end of the campaign, with the chosen progression speed (exponential, linear or custom).

The number of additional conversions estimated to be received, in total, through the forecast period, if the targeted ranks are reached, and corresponding to the additional number of visits estimated.

This is what it would cost to generate the same number of additional visits through Google Ads only. The estimation is done at a keyword level, taking the individual estimated visits and CPCs into consideration.

The chance of reaching the targeted ranks in the selected timeframe based on the SEO difficulty of the keywords. The forecast could either be realistic, ambitious or too ambitious.

Transparency. Sophisticated for the sake of accuracy, but fully transparent for trust and understanding.

The detailed calculation, at a keyword level, can be explored through the “Calculation Analysis”. You’ll find the button in the top side and here's what you'll see:

You will find all of the metrics presented earlier, with the addition of:

Accountability. Transform a forecast scenario into an Objective.

Efficiency. An SEO proposal that won’t be refused or get “ghosted”.

When an SEO proposal includes a PPC-like business case, by taking almost anything that can influence the further performance of the non-brand organic traffic into account, it simply wins.

This changes the conversation with a client, sets realistic expectations, and helps justify the SEO budget. We wrote more on crafting winning SEO proposals in our Search Engine Journal article on how to avoid silent NOs.

And to further emphasise on efficiency, the Proposal Builder will help you create a beautiful Google Slides deck with SEOmonitor data, within minutes.